Am in the Reblog mood this week, maybe its because my creative juices have run out, or maybe they have gotten a replacement of froth. Any way i was just reading this blog post by one of my favourite writers one BikoZulu and this post just jumped to me……so avid readers allow me to indulge you in some of his work. 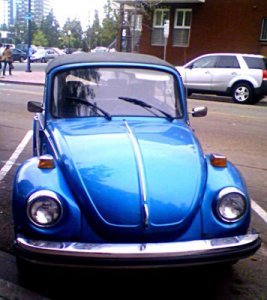 “I swear I don’t miss her. I don’t. I don’t think about her. Her memories have but peeled off the walls of my mind. I haven’t thought about her in the longest time. I don’t wonder what happened to her (well not until I sat down to write this piece, thank you very much, Gang!) Nothing reminds me of her, nothing, not with the possible exception of blue Volkswagen Beetles. But how often do you see blue Volkswagen Beetles in Nairobi? Not when it’s raining Mistsubishi’s and Toyotas. But I’m terribly fascinated by how she left, how she severed herself from my life without a single thought. The brevity. The chutzpah. The cold heartedness. I’m totally enthralled by the finality of her disassociation. One evening she was there and the next she was gone, leaving not a single trace of her behind. Not a footprint. Not a note. Not a word.  Not even a scent. She left me with nothing. A clean break. Poof! Gone with the wind.

Her name was Taffy. That’s her real name by the way. I’m not trying to protect her identify because she has become a ghost in my life and ghosts don’t read blogs. Anyway, when your mommy decides to call you Taffy you got to be a piece of work. You got to be able to make men feed off your palms. A femme fatale. And Taffy was the poster child for all things fetching. She was tall, she had playful eyes, she was chocolate and she was sweet. Back then – in the late 80’s and early 90’s – the sweetest thing was this candy called Toffi, but that’s before you had cast your eyes on Taffy.

They lived in a corner house, six houses from ours. They were the wealthier than the neighborhood. Her mother drove a Mercedes. She and her brother –Junior – went to an expensive school. Her mom was hot (that apple and tree thing) and just about the only mother who constantly wore tight jeans in the neighborhood. I suspect that other mothers prayed for her during their prayer meetings. Taffy was older than me by a good two years, that seems like 10yrs when you are only 13yrs old. Older guys came all the way from other estates to pay homage to her, to see the beauty from across the hill. I could tell she was going to be a complete knock out in her 20’s because even in her mid-teens she had a bright future behind her (if you know what I mean?). I was over my depth but I was crazy about her. I mean totally cuckoo about her.

I was easing into teenage, escorted by the idealism that defined that time; music. New-age jam to be precise. Mint Condition. Color me Bad, New Edition. Brandy. Raphael Sadique. Shai. And somehow music brought us together with Taffy. She loved Salt N Pepa and to prove it she always wore checked shirts and tied the front in a small knot. And if you looked closely you could see her navel through the knot and you can’t image how many days that sight would take me. It flamed my dreams.

She knew I liked her and she used me to get her “dubbed” tapes. But I know she didn’t feel shit for me; I wrote her letters on expensive stationary but she only replied a few of those. But I didn’t care that she wasn’t mad about me, I was only too happy to go over to their house during holidays and breathe the same air she did.

Then one day without warning she took away my virginity. Yes. It happened at their backyard in one of her dad’s un-used blue Volkswagen Beetles. It was a KDF something 7 something, I think. The whole ordeal lasted 2 minutes but I think I lasted a little over 30secs. The rest was spent by me fumbling with her knickers like an idiot, me trying to find room for my long legs, me wondering where her long legs would go and most embarrassingly me asking –over the noise of my thudding heart – the dumbest question of all time; “Are you sure you want to do this?” Damned Volkswagen Beetle crumbed my style (literally and figuratively hehehe)

We became a bit closer after that. But we never had any more happy endings after that, I think partly because I didn’t know how to ask but I suspect because she didn’t offer again. She replied to my letters more though. And we kissed a few times. And when she was feeling philanthropic she allowed me to feel her bum. Those days were as rare as Christmas though.

One morning I pressed their gate buzzer. Pressed the damned sucker so many times and nobody answered. Their neighbor later came out and told me they had moved out the previous night (when growing up people moved out at night, it was fashionable) I was like hell no, the previous evening I chatted her briefly outside their gate and she didn’t mention anything about moving out. But turned out they had moved out. I was horrified! It was mysterious and hurtful. My mom later told me that her father had taken a second wife and her mother had decided to pack it in and leave him. So she took her and Junior away to a place nobody knew.

That was 18years ago. I have never met her since. I have never heard of her. It’s like she never existed, a phantom who initiated me into “adulthood.” She should be 35yrs old now. Maybe she is in the states (she always was fascinated by Uncle Sam), maybe she moved to Abuja where she runs a curio shop. Maybe she is a teacher in Jakarta. Maybe she is a community health worker in Laos living on rice and good intentions. Maybe she is married with three kids who are not privy of their mother’s colorful history with Volkswagens. Maybe she lives 20mins away from my house. If she is in Nairobi I’m certain that, unbeknownst to us, we have shared a pub. I don’t know if I would recognize her if I met her. I don’t know if I would want to. But if I’m ever to meet her I will ask her one question; “Why the hell didn’t you say goodbye, Taffy?” “